Not many businesses have changed as much in the span of the last 20 years as the video arcade games. Early video games were once only found and enjoyed at amusement arcades, which had tons of different video games of various genres. These video arcade rooms were favorite spots where kids could visit, enjoy the company of their friends and play their favorite games. With the advent of new PC gaming and console game box options being driven by inhome entertainment growth, is the death of the community arcade business at hand?

The history of the video arcade game is one of great commercial success and incredible growth. Starting in 1971 with the earliest known coin-operated arcade video game Galaxy Game and it’s commercial cousin Computer Space, the video arcade game business was off and running. Soon after Japanese greats like Atari, Taito and SEGA launched several new boxed games and market innovations, including the four-way joystick controller, better sprite graphics and multi-player control.

Jump ahead 20 years to 1991 and arcades are a common feature of shopping malls and community retail. Jump ahead another 20 years, and the arcade business has become a much different one. Down from the once great and unstoppable revenues and manufacturer proliferation it once was, to an arcade game industry that has dramatically shifted focus from stand-alone retail locations to desktop and home-based console gaming.

Although there has been been a slight resurrgence in the popularity of arcade game rooms for the bar crowd - that 21 to 28 year old yuppie night-life demographic, the overall stand-alone arcade business as a family entertainment option continues to decline.

My amusement industry colleagues may want to thrash me for saying such things, but you need look no further than the market itself. The video arcade business has been in steady decline since the mid 1990’s, with many game room manufacturers and suppliers having either gone out of business, or have been bought out by a few larger arcade machine or game manufacturer.

One of the reasons this is happening, is because of the dingy, negative atmosphere the street-corner game room let itself become. The old street corner video arcade game center that you and I grew up with back in the 80’s (yes, I am dating myself) has become somewhat of an eye sore and public menace in the mind of community members and those neighbors that live nearby. Many of the older video arcade game businesses that used to be open late into the evenings, and managed by the not-so-concerned amusement owner, became a haven for illicit activity, drug use and other dingy things we rather not mention here.

The target demographic for a video arcade business is typcially teenagers 13 to 18 years, after school or on weekends with nothing to do. No, I don't have anything against teenagers, but this demographic is the most challenging to manage and by far the most fickle customer you could find. What's hot this year, isn't usually hot again next year.

Which brings me to reason number two, the cost of keeping this kind of amusement business fresh, new and exciting. These video arcade game boxes are not cheap. Today’s multi-player games can easily run into the $20,000 range and keeping your game room fresh is a huge capital expense year over year. In fact the average arcade game has a shelf life of about 24-30 months, 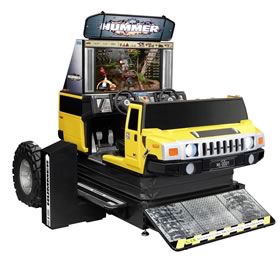 so for that $20,000 individual game investment, your return opportunity may be two or three seasons at best. For example, this 2-player Hummer Deluxe 40" LCD Motion Simulator has a list price of $39,500 $USD. That's 19,000 players at $2 a play to recoup the investment, before the game looses it's appeal. And that's just one game, the average arcade game room today has 50 to 60 games, so the capital investment is substantial and has to ensure a return on investment.

Secondly, as they age under hours of game play, video arcade machines require manitenance. In older games like pinball machines, redemption games, both electronics and mechincal systems wear out and finding parts for these older game boxes can be a challenge. Depending on how many games and what kind of arcade games you have, you will most likely require onsite maintenance staff in order to keep your video game room 100% functional.

The Arcade Business at Home

Another reason we are seeing a decline in stand-alone video arcades, is the in-home explosion of quality games for the set-top gaming consoles PS3, XBOX and the Wii. The quality of these games along with a social experience you can’t find in your typical video arcade business

Along with Hi-Def visuals from HDTV and plasma screens, the increasing penetration of broadband internet services and integrated HD movies from Netflicks and other online entertainment choices, this digital convergence is providing real competition for the old style video arcade game business. Many industry observers and analysts see this digital trend towards online gaming and inhome entertainment options conutinuing through the next five years.

This is not to say that arcade games and the video arcade game room are a thing of the past. Arcade games, redemption games and coin-op are an integral component to the overall activity mix of a well developed family entertainment center business, and can create a strong draw, and profits for the fun center operator.

So, the question a new arcade business developer needs to ask themselves is, are you thinking to start a video game room business, or a family fun center with a arcade game room?

With a target demographic of teenagers, the typical arcade business is just that - arcade machines, tokens, maybe some redemption games and merchandise, in a small 2,000 or 3,000 square foot retail store.

As an integral component of a larger fun center attraction or amusement park, the arcade game room is still an important part of the activity/revenue mix and needs to be considered. This consideration comes when the amusement business entrepreneur looks at their business goals, and more importantly, their target demographic. If the intent is to focus on families (and you have heard us say it before: families in the amusement industry are identified as parents with children 12 years and younger), then the types of video games offered needs to have an appeal for both parent and child.

In this circumstance, the majority of play-value for the family demographic comes from redemption games. Read more about arcade games vs. redemption games here. If, the amusement business goals are towards an older age, target demographic then a diverse mix of video arcade games is more appropriate. In this case an assortment of quick-play games, mulit-player arcade games, redemption and simulation games, along with more traditional driving games, shooting games, and pinball machines should be included in the game room mix.